SOLAR POWER IS A GREAT INVESTMENT

From a financial perspective, Solar Power is a GREAT investment.  In British Columbia, this fact is not yet widely accepted or understood.  And it is difficult to prove without a few spreadsheets, the thought of which usually send people into a deep slumber.  However, in this post I will present the information that substantiates the fact that investing in solar power is a wise financial decision.  So grab a cup of coffee and brace yourself for some exciting facts and figures!

A SOLAR POWER SYSTEM CAN PROVIDE: 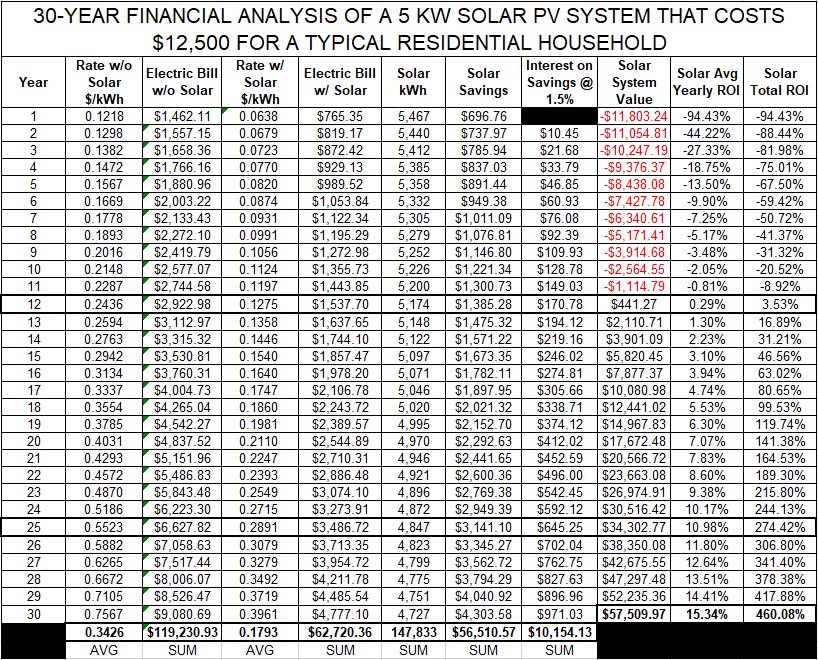 The above table looks at the payback and return on investment of a 5 kW Solar Power System for a typical household, which at todays prices would cost around $12,500 for a standard installation.  You can see in the “Solar System Value”column, that after 30 years you would have saved $57,509.97 after payback of the system.  This translates into an average yearly ROI of 15.34% and a total ROI of 460% over the expected lifespan of the system.

At this point you may be wondering how on earth I came up with these numbers.  All I can say is, read on….

Many people pay their electricity bills without really understanding how the provider of the electricity (utility such as BC Hydro or Fortis) charges them.

For Residential consumers of electricity, the most common rate structure involves 2 steps, where up to a certain amount of electricity is billed at one rate and then all electricity beyond that is bill at another higher rate.

See below for BC Hydro’s Residential Rate explanation as seen at the following link. https://www.bchydro.com/accounts-billing/rates-energy-use/electricity-rates/residential-rates.html 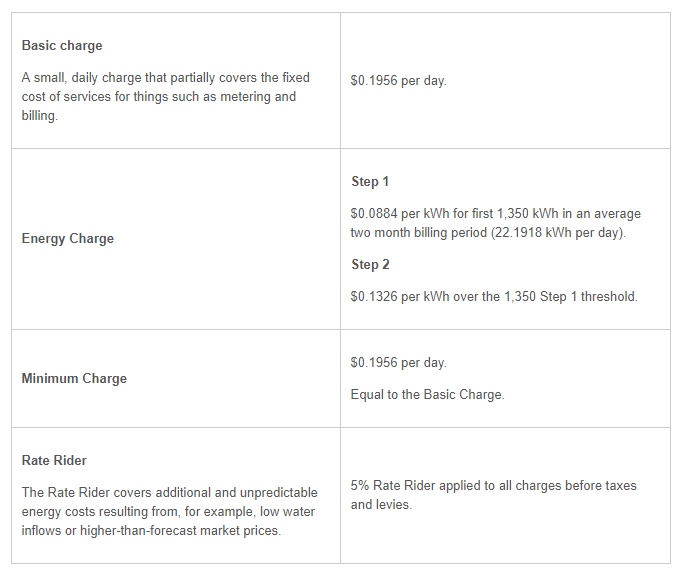 When you get your bill each month or two months, you may be presented with something that looks like the image below. 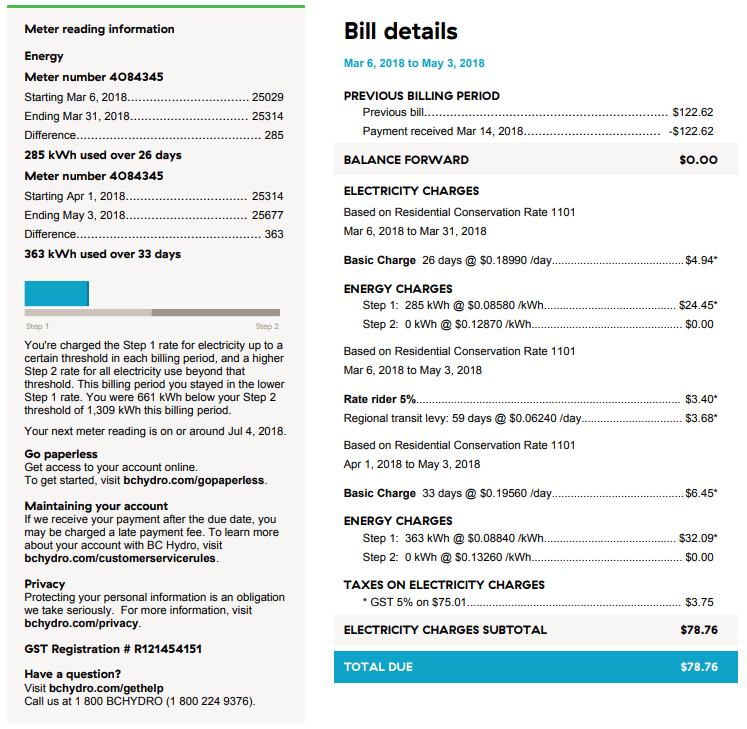 I encourage anyone not already doing so, to sign up for the BC Hydro online account, where you can see your current and previous bills, daily consumption, and lots of other interesting statistics related to your properties energy usage.  https://app.bchydro.com/sso/UI/Login?realm=bch-ps&goto=https%3A%2F%2Fapp.bchydro.com%3A443%2FBCHCustomerPortal%2Fweb%2Flogin.html

Depending who you are, being able to check your electricity usage either interests you or is extremely boring.  To those who feel the latter, the world is moving to more energy conscious societies, so please get on board and educate yourself now, or risk getting left behind.

Below is an image of a spreadsheet table detailing the cost of energy over 1 year for a typical consumer of electricity (1,000 kWh).

As you can see from the above table, a typical household is currently spending around $1,500 per year on electricity.

Now would be a good time to explain the Net-Metering program currently in place, which is how BC Hydro deals with anyone that produces their own electricity, whether it be from solar, wind, hydro, etc., whilst remaining connected to the grid.

The numbers in the “Solar kWh” column seen in the table above were generated by the PVWatts website, which uses historical weather data, and takes into account tilt angle, direction, and various sources of losses to come up with the numbers.  It is trusted source for modeling Solar Power Systems.

NOTE: 10% SYSTEM LOSSES IS VERY CONSERVATIVE.  ACTUAL LOSSES COULD BE LESS, WHICH WOULD RESULT IN HIGHER SOLAR OUTPUT VALUES 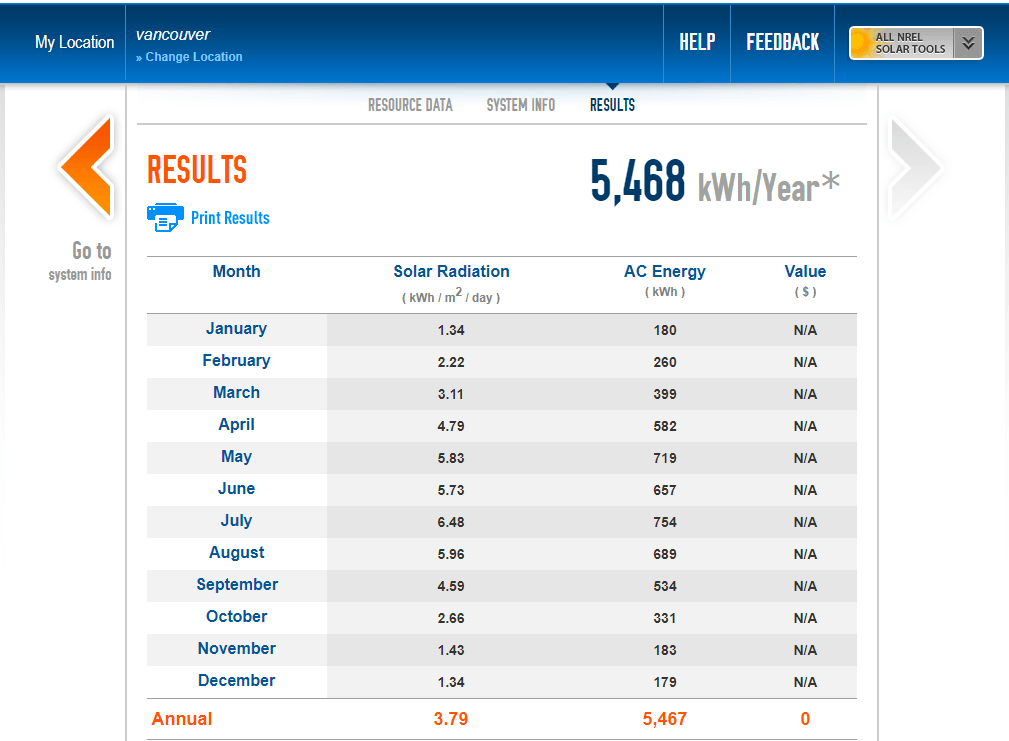 Another option would be to look at the website below to get a better idea of how the output of a Solar Power System changes with respect to different factors.

Proof of this is shown below in a Report by BC Hydro, and a study by Hydro-Quebec, both of which can be found at the following links.

A solar PV system is expected to last 30 years or more.  Evidence of this is supported by studies leading Solar Manufacturers and reports of systems that were installed as far back as the early 1980s (using early 80s technology!) and are still going strong, showing very little change in Solar Power production.

The “Interest On Savings @ 1.5%” column shows how much interest is earned per year on the amount of money saved on electricity by a Solar Power System.  I am assuming here that this money is going into a Registered Investment so that I do not have to take into account Income or Capital Gains taxes.

COMPARISON WITH OTHER INVESTMENTS

I am not a financial advisor, but I felt it necessary to delve as deep as possible into the financial aspects of owning a Solar Power System, in order to address the concerns by many that it does not make sense in BC.  I hope I have shown here that it not only makes sense but that investing in a Solar Power System is a great investment.